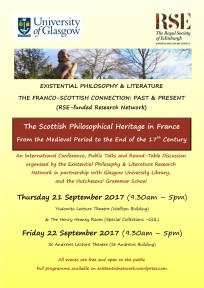 first event took place on the 21–22 September 2017 at the University of Glasgow and was devoted to the close examination of the Scottish philosophical heritage in France from the medieval period to the end of the 17th century, in the wake of the celebrations of John Duns Scotus’ 750th birthday last year in Scotland, and the series KE events organised in France by the Dr Ramona Fotiade on the occasion of the religious existential thinker, Lev Shestov’s 150th anniversary which highlighted the legacy of scholastic debates in postmodern French and European philosophy from Heidegger to Blanchot, Deleuze and Michel Henry.

The second event took place at the University of Glasgow from 29-31 May 2018 and was jointly hosted by the SMLC, the French Consulate and the French Institute (Edinburgh).  It brought together Scottish and French academics working on the Franco-Scottish literary 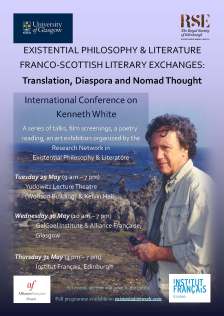 exchanges in the modern and contemporary period and focusing on issues of translation, diaspora and postmodern philosophical reflection. The work of Glasgow-born poet and essayist, Kenneth White, who has written on existential philosophy (Lev Shestov) and its impact on French thought (Deleuze and the concept of ‘nomadism’) was discussed, as well as the French translations, reception and influence of Robert Louis Stevenson’s and George Mackay Brown’s work. New research collaboration was established with colleagues from research clusters at the Universities of Grenoble and Toulouse, working on Scottish Literature in France.

This event prepared the final event in the project, an international conference organised in partnership with the Fondation des Treilles, gathering the main network scholars and non-academic stakeholders from Scotland, the rest of the UK and France in order to re-appraise and promote the Franco-Scottish philosophical connections from the 18th century to the present.